Our congregation is experiencing a period of change and growth. We are supported by a talented minister, Rev. Jenny Rankin, who will be with us through June 2022, while we work to call a settled minister. Jenny led a nearby congregation for over fifteen years, then trained for transitional ministry and has served several congregations in this area over the past decade. We feel blessed to have her in our midst.

Read on to learn more about our transition team, our goals for this interim period, as well as our reports and findings at this point in the process.

In January and early February, 110 parishioners participated in Listening Circles to reflect on and share their experience of Rev. Manish Mishra-Marzetti’s ministry and departure.

Over 30 church leaders & staff representing all major committees and boards gathered to discus:

Large and small group conversations were held to assist healing after viewing a video of Manish’s experience living in Lincoln. Insights into lessons learned, strengths we can “lean on,” and thoughts on how to move forward were discussed.

Can We Talk... Spirituality

In May, over 40 members of the congregation gathered in small groups to begin exploring and sharing their individual spiritual journeys.  Participants also discussed ways in which the church could add further spiritual value to their lives.

The autumn was devoted to understanding and appreciating First Parish in Lincoln’s denominational roots and unique heritage.

In the Fall we also endeavored to explore create a “family portrait of our spiritual community” exploring personal spirituality through the Spiritual Snapshot Survey.

194 people responded to the survey, not just by checking multiple-choice boxes, but with extensive, insightful, often beautiful comments, providing a bounty of thoughtful reflections on their own spirituality and on First Parish.

An exploration of our Values began in the first weeks of 2020.  The Transition Team poured through decades of First Parish surveys, studies, and documents to understand what has been consistently important to us through the years.  We also held workgroups with several small groups to discuss our essential and enduring tenets.  This work was interrupted in mid- March by the COVID-19 pandemic and resumed in the fall of 2020.

Over the summer, the Team assimilated the themes revealed by our research and workshops.  Using this input, they created a set of proposed Value statements.

In September, the Transition Team asked the congregation for feedback and reactions to the proposed Values.  Additionally, on October 6th, the congregation met in small and large groups for further discussion.

While the Value Statements were being fine-tuned, work began on crafting FPL Vision and Mission statements.

Exploration of a church Vision had occurred in 2017, when Dwight Gertz and Steve Johnson led The Vision2020 exercise. At that time, over 150 parishioners participated in a series of small discussions which explored a question about Aspirations – what we wanted FPL to be in the future.

The Transition Team updated the Vision2020 Aspirations to reflect several strong themes that had emerged from our recent Values discussions.  The congregation gathered in December 2020 to reaffirm the updated Aspirations from Vision2020, providing the building blocks for our current Vision.

January’s work focused on the development of a Mission statement based on the Covenant and Call to Ministry.  Jenny and Sarah offered a sermon series on “Words that matter to us,” taking a deep look at the words and phrases of these church cornerstones to help broaden and deepen their meaning.

For the past year, the Congregation has been highly engaged in articulating our Values and forming our Vision – thank you!  Over time, we noticed that suggestions became more a matter of word choice or emphasis than of material changes, additions, or disagreements.

It became clear that no particular set of words would ever seem perfect to everyone, and that the important areas of focus had been identified and articulated.  We recognize also that the words will need to change over time as the congregation and the world around us changes.  So, the Transition Team has decided to declare the current version of Values, Mission and Vision “Final for Now.”

The “Final for Now” statements provide a strong direction for our Strategic Planning work and for the Search Committee moving forward.

We think it describes the First Parish community as a whole and hope you do too.

For the past three years, our congregation has been engaged in an impressive number of discussions and gatherings designed to help FPL prepare for the search for our next settled minister.  As a spiritual community, we gathered for conversations to promote healing and understanding.  We explored and shared much about our individual spirituality.  The long arc of our discussions shaped an ever-clearer picture of a collective First Parish identity.  The evolution of our conversations allowed us, a community of individuals with diverse beliefs and philosophies, to craft and embrace a set of shared Value, Mission & Vision statements.

These statements have already provided direction for the first set of Strategic Planning discussions and are serving as an important guide for the Search Committee.  Our inspirational Vision will steer our path as a church going forward.

Last spring, the Transition Team brought its work to a close and began the poignant task of gathering and summarizing the discussions and learning from the last three years of our interim period.  As we reread and relived each conversation, we were struck and moved by your unflagging engagement, sincere honesty, and depth of thought.  Thank you.

The Transition Team Summary Report gathers all our prior reports, from the first Listening Circles to the most recent Strategic Planning Roundtables.

We encourage you to read the full report.  Appreciate the development of our learning, the depth of our discovery and the opportunities for further growth.

The Transition Team Summary Report can be found using the link below.  Additionally, a hard copy will be mailed to each household in the coming weeks.

Focus Points of an Interim Period

The purpose of an interim period is to help our congregation prepare for the arrival of a new minister by achieving: 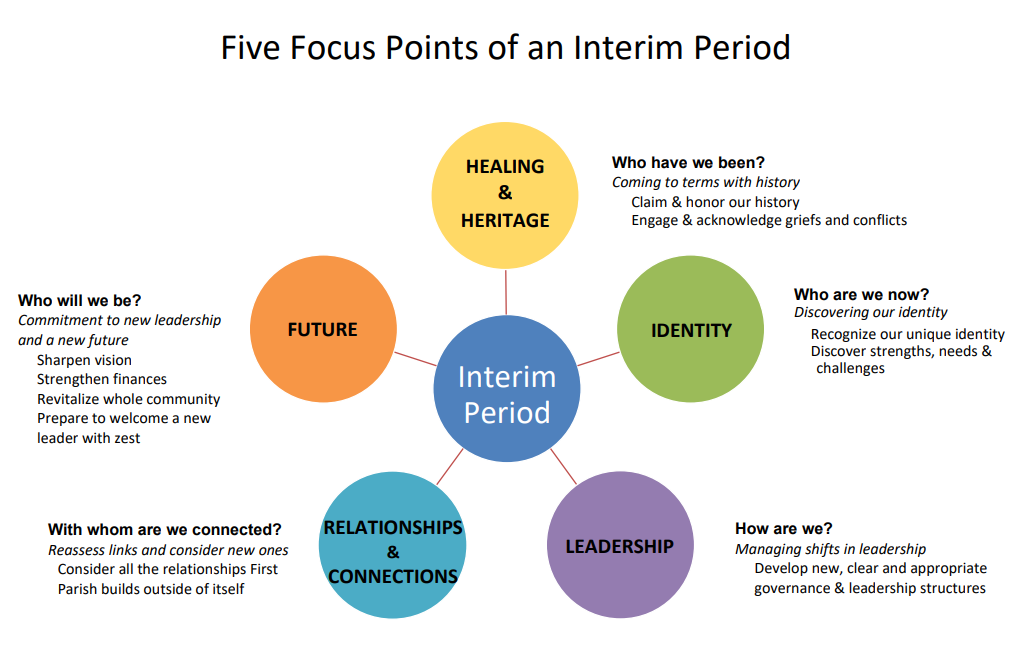 The Transition Team was appointed by The Parish Committee in the fall of 2018 with input from both the Parish Committee and Jenny Rankin, our Interim Minister. The team consists of  seven (7) members; the co-chairs of the team were determined by a vote of the team members themselves. The team is made up of church members; young, old, new(er), long timer, male, female, working and retired.

The Team’s primary mission is to lead the congregation through a period of self-examination, discovery, and renewal.

When the Transition Team announced the opening of the Spiritual Snapshot survey in November, we had one concern: would anyone actually answer questions about their own spirituality? The result amazed and delighted us. By the month’s end, 194 people had responded, not just by checking multiple-choice boxes, but with extensive, insightful, often beautiful comments.

A Shared Ministry Review (SMR), also called a Whole Church Evaluation, is one way that churches evaluate their mission and priorities, their ministers and staff, and the resources and structures that support them. Our congregation underwent this process in the Spring of 2018 to endeavor to clarify the strengths, aspirations, and areas for growth in First Parish Lincoln.

All communications we have had with the congregation either through The Parish News, The Weekly New Briefs, or special e-mails are available in the Transition Teams Google Drive Public Documents folder. Documents are listed in ascending chronological order, from oldest to newest.

An Introduction to The 7 Unitarian Universalist Principles