The First Parish in Lincoln has its heritage in Puritan Congregationalism.  Today, a non-sectarian church, it is affiliated with the United Church of Christ (UCC) and the Unitarian Universalist Association (UUA).

First Parish origins.  In the early 1700s, what is now the town of Lincoln was comprised of the outlying farms of three contiguous towns:  Concord, Weston and Lexington.  Because of isolation from their meetinghouses, the 18th century gathering place for religious and civic activities, the isolated residents of these towns petitioned the Massachusetts General Court to create a separate township.  Initially denied, the citizens’ petition was granted in 1746, and a meetinghouse was built in 1747 to serve as the venue for both religious and governmental gatherings in Lincoln. That same year, a Covenant was completed and the church that would, two centuries later, become The First Parish in Lincoln was formally established. When the Town of Lincoln was incorporated in 1754, the Town became the civil body voting on church matters and raising funds for the minister’s salary.

A century as the only church in Lincoln.  The church took root and grew, calling just two long-serving and successful ministers over the next 78 years – The Rev. William Lawrence and The Rev. Dr. Charles Stearns. Even as the religious ferment of the late 18th and early 19th centuries led many nearby Congregational churches to become Unitarian, the First Parish in Lincoln remained a Congregational church.

Unitarian church formed.  The first century of the Congregational church ended with a difficult period. The Rev. Elijah Demond, the third pastor, alienated many with his rigid theology and fire-and-brimstone sermons.  Town Meeting refused to vote the minister’s salary.  Some 140 congregants departed First Parish to join churches in nearby towns, about 50 to Unitarian churches.  And in 1841, a group of men “of the liberal persuasion” formed the Unitarian Congregational Society in Lincoln.  A meetinghouse, which is now our church Sanctuary, was completed in 1842.

Separate paths. . . or maybe not. The two congregations had doctrinal differences but friendly relations.  Economically, however, the late 19th and early 20th centuries were difficult times for both.  The idea of uniting the churches was considered as early as 1859, when fire destroyed the Congregational church building.  (It was rebuilt, then scrapped in 1892 and built from scratch as the “stone church” that now serves as our Parish House, with a Hutchins organ that is still played.)  Uniting was considered intermittently, and became more serious with joint summer services in the1920s. Finally, in 1935, a trial federation of the Congregational and Unitarian churches began under the direction of a joint committee of four from each congregation, and The Rev. Charles Styron was called to lead the federated church

Together!  Thanks to Charlie’s leadership, the trial federation worked out satisfactorily and “the consciousness of differences” dimmed.  A plan of union and a set of by-laws were approved and, on May 25, 1942, the Congregational Parish and Church and the Unitarian Congregational Society simultaneously voted themselves out of existence and into the framework of the First Parish in Lincoln.  The united church had no creed but subscribed to the following Covenant:

In the love of truth
And in the spirit of Jesus,
We unite for the worship of God
And the service of man.

This Covenant, modified in 1983 to replace the word “man” with “all,” continues to this day as a cornerstone of our Sunday service.

Focus in, focus out.  The remainder of the 20th century saw the First Parish steadily move beyond doctrinal separation (though one parishioner was known in the 1990’s to count the mentions of “God” in the service and reprimand the minister when she felt the number was excessive). Charlie Styron, whose ministry continued until 1970, was instrumental not only in keeping the congregation together but in fostering involvement in national social issues such as racism and the Vietnam War.  The ministries of The Rev. William Gregory and The Rev. Nancy Rockwell continued those themes.  Bill memorably pictured the church resting on three pillars: “community life and caring,” “spiritual life and growth,” and “justice education and action.”  Nancy Rockwell combined poetic and mystical sermons with calls to social and environmental action, once saying “We live in a particular moment, but the transcendental remains the same. The minister’s job is to make clear how the transcendent is with us in the particular moment of time.”

A lay committee, in addition to updating the Covenant, developed a Call to Ministry in 1983, which would become the second bookend of our Sunday services:

We go forth from the worship of God
To be faithful to the vision of Jesus
To affirm each person’s dignity
And to cherish the living earth.

Several infrastructure additions also occurred during this vibrant half-century:  a wing was added to the Congregational church building in the late 1950’s to accommodate Sunday School and administration; a parsonage was built to allow ministers to live on First Parish premises (1958); the Stearns Room was added to the sanctuary as a gathering space (1963); and a choir loft was built and a Noack organ was acquired for the Sanctuary (1968).

The 21st Century began with the stable and successful ministry of The Rev. Roger Paine, III (1996-2014).  Responding to the national decline of organized religion, Roger noted that “We are living in … a ‘post-denominational’ age.  Where once people sought out a church home based on denominational labels, today most of us are less drawn to doctrine and more to a sense of open-mindedness – a blend of tradition and spiritual breathing room.”  The congregation supported a successful capital campaign that enabled renovation of the Sanctuary, Parish House, and Parsonage; refurbishing the Sanctuary’s Noack organ; and building a new community gathering space, replacing and keeping the name of the Stearns Room.

Internal and external challenges followed the stable years.  The brief three-year ministry of The Rev. Manish Mishra-Marzetti (2015-2018), which revealed pre-existing and new congregational rifts on matters of substance, style, and personality, ended in strife.  And the challenges of Covid-19 soon followed.

In a four-year interim ministry, The Rev. Jenny Rankin (2018-2022) led us first through community healing and then pandemic-inspired innovation.  Deep congregational conversations helped us clarify our values and our vision for the future.  Social distancing led to outdoor meetings, Firepits for Five, and Quiet Walks.  ZOOM kept us together remotely for Sunday services, committee and education meetings, and social connection.  What might have been a time of gloom and doom for First Parish ended with a feeling of renewed strength and vibrancy.

Today and tomorrow.  A new chapter began in 2022 as the congregation welcomed the co-ministry of The Rev. Kit Novotny and The Rev. Nate Klug.  Kit and Nate are already bringing new energy and new ideas to First Parish, as well as two seasoned perspectives and two sources of inspiration in the pulpit.  Ministers and congregation alike are excited to create this new chapter. 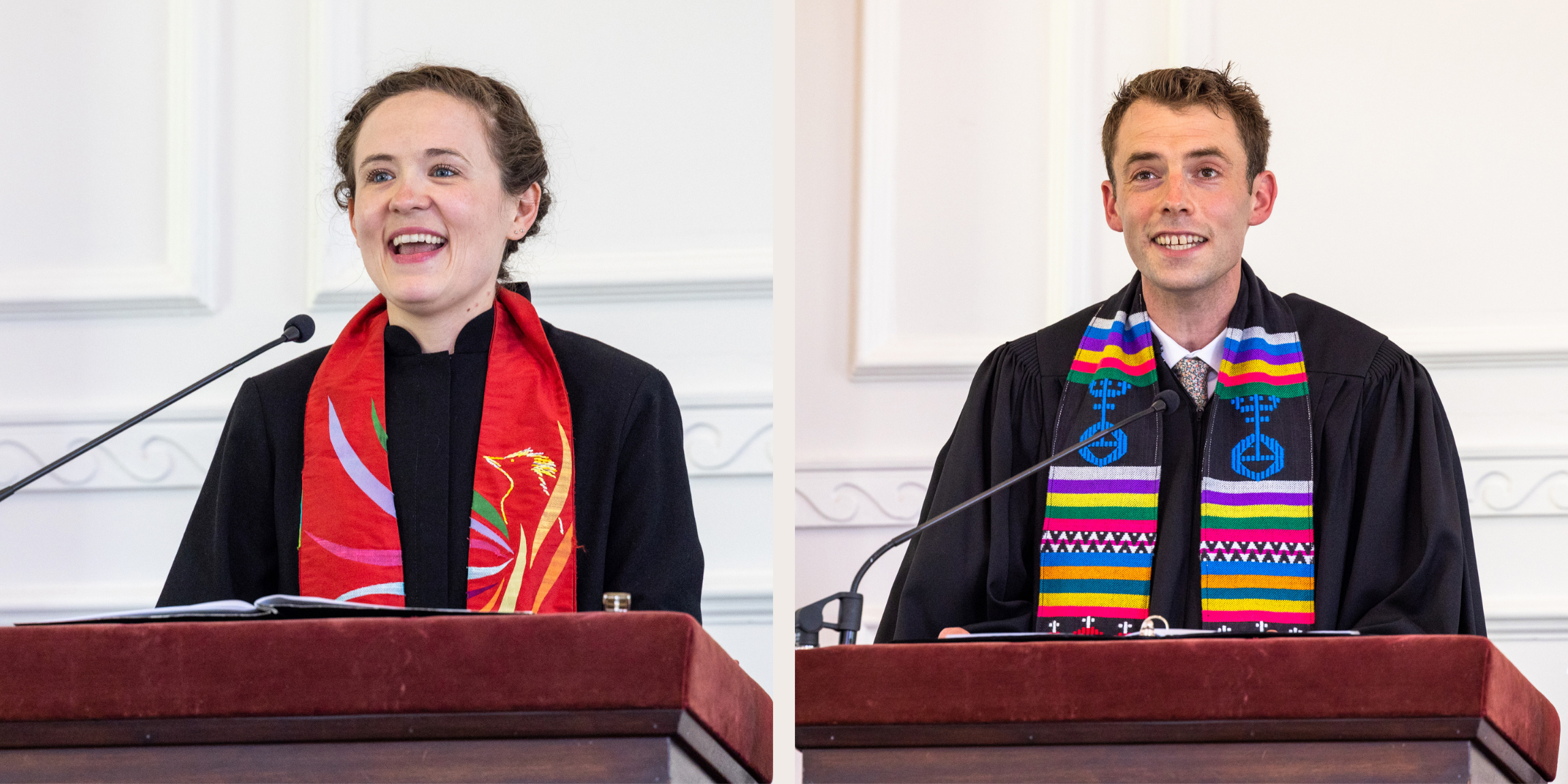 Revs. Kit and Nate began as Co-Ministers of First Parish in Lincoln in August 2022. They are drawn to FPL’s vision of a warm and inclusive spiritual community, its passion for environmental and racial justice, and its interest in intellectual and artistic engagement. They look forward to working within a creative ministry model to lead this historic congregation in its next chapter.

Nate and Kit are graduates of Yale Divinity School and were both ordained in the United Church of Christ in 2013. They served separate churches in Iowa and the Bay Area of California before returning home to Massachusetts, where they both grew up.

Kit and Nate share a passion for transformative preaching, and for helping children, youth, and adults discover joy and surprise in their spiritual journeys — however they seek and name the sacred.

Nate is a poet and essayist and the author, most recently, of Hosts and Guests (Princeton University Press). He teaches at the Graduate Theological Union and Dominican University’s MFA program. Kit has a background in professional theater and improvisation and is a certified yoga instructor with training in Trauma Sensitive Yoga. She is a member of the Next Generation Leadership Initiative (NGLI), a program for younger UCC clergy identified as promising leaders in co-creating “the Church of the Future.”

Nate and Kit live in nearby Concord with their two young daughters, Gwendolyn and Zoe. When they’re not at church or chasing their children, they love a strong cup of coffee and the beauty of the New England seasons.